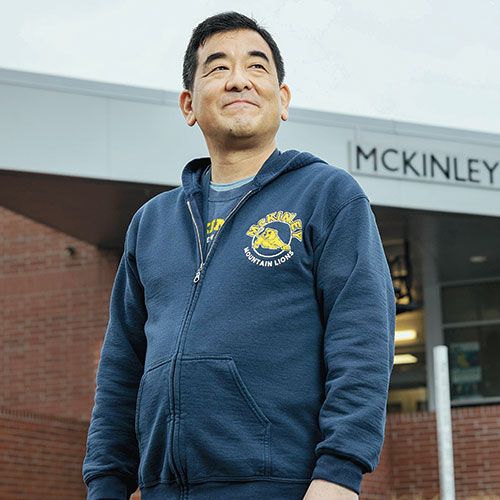 Hometown: Beaverton
Why he is an Amazing Educator:
He show leadership and compassion as an elementary school principal and former special education teacher. 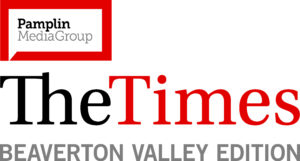 A TRADITION OF COMPASSION

Every morning before classes start at McKinley Elementary School, principal Aki Mori is out in in front of the building directing traffic.

During school hours, Mori doesn’t coop himself up in his office. Instead, he takes a desk out into the hallway and works there, ensuring that he’s visible to every student who walks by.

It’s a point of pride for Mori that “every student” knows him.

Mori has either taught or been an administrator at every grade level, and he insists he doesn’t play favorites. Still, there is something truly special about how elementary school-age kids are truly excited to be at school.
“They’re smiling. They’re waving to me and to each other,” he said. “They just love being in school, and that part is just so infectious and inspiring.”

Mori feels at home as a high school principal, but education wasn’t always part of his planned career trajectory, he says.

Mori spent his first few years after college working for an air conditioning manufacturer. But Mori spent his free time volunteering with kids and adults in mentorship and reading.

“That was much more satisfying to me than the corporate work that I was doing,” he said. “And so once I realized that that was more fulfilling to me, that was when I started my journey in education.”

In 2006, Mori moved to Beaverton in what he describes as a “typical California story.”

“We came up for a weekend vacation and realized how much more beautiful it was up here,” said Mori. “Then one thing led to another, and we decided we wanted to live up here instead and start a family.”

Now in his fourth year at McKinley, Mori says it’s still a mystery to him why exactly he was chosen to lead McKinley, but it was one of the luckiest things to have happened to him.

Like nearly every other facet of society, the pandemic has been tough on faculty and students alike.
While Mori’s job certainly isn’t easy, he says it pales in comparison to what the rest of his staff is going through. The job of teaching already felt impossible long before COVID-19 graced headlines, he added.

“When the pandemic struck, our entire mode of teaching changed,” he said. “It was a completely different type of job description, and a job description that continually has changed and continues to this day.”

Mori has faced personal tragedy in his own life. His sister died when he was a teenager, and later on, he watched a family member struggle with mental illness. He is familiar with grief and feelings of helplessness. Those experiences have helped inform how he connects with other both in his personal and professional life.

Understanding that not everyone is going to be the best version of themselves at work, and that many people are facing their own personal tragedies, is essential in leadership, according to Mori.

“When you’re experiencing a situation where you’re truly helpless and you feel like things are crumbling around you, going through that type of experience is so significant, because I was only able to get through it because people had so much compassion for me around me. The people around me allowed me to crumble in front of their eyes,” he said.

But Mori didn’t start the tradition of compassion at McKinley — he is simply carrying on that legacy.

At McKinley, 59% of the student body qualifies for the free or reduced lunch program, and there are quite a few families in need. But everyone shows up for each other, he says.

“I’m so proud of McKinley,” he said, “because wherever there’s a need, wherever it’s among our staff, whether it’s inside the four walls of our building, or whether it’s with a family, someone comes up and fills that void.”