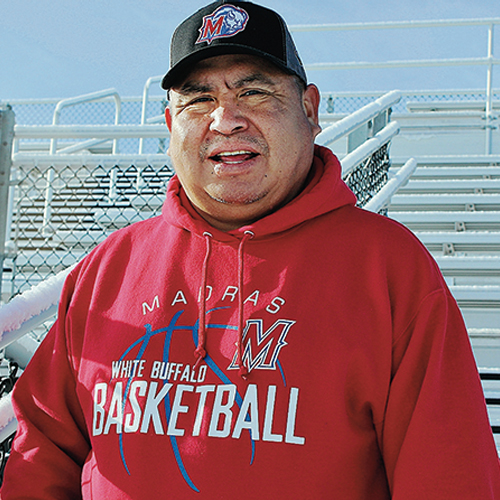 School: Madras High School
Why he is amazing: He guides Native American students through high school and helps them choose their paths after graduation.

CONNECTING WITH HIS PEOPLE

“What’s happening in this class? Do you need help? What do you plan on doing after high school? What do you think you want do?” he asks.

David’s questions have led to the success of countless Native American students in Jefferson County, where David has found his calling as the Native American Liaison at Madras High School.

“Butch is totally committed to the Madras and Warm Springs communities,” said MHS Principal Brian Crook. “Butch knows our students and families and has built so many trusting relationships with them.”

David grew up on the Warm Spring Reservation and credits his parents’ guidance and support for getting him off on the right foot. He graduated from Madras High School in 1987, but after a year of college, he realized it wasn’t for him. He ended up working in the logging business until 1998 when he took a job as an educational assistant at the school in Warm Springs.

The next year, he began making the 35-mile trek from his home in Simnasho to Madras, where he was the Native American Liaison for Jefferson County Middle School, helping students improve their grades and attendance. Then, about six years ago, David moved to the high school, where his job expanded to help Native students extend their education, whether that be in college, trade school or the work force.

He’s got his work cut out for him. MHS has roughly 225 Native American students, a third of the school population.

And the COVID-19 pandemic has changed the way he interacts with kids.

“He goes above and beyond every day to make sure our students’ needs are met so they can engage in distance learning,” Crook said. “He makes phone calls, sends emails and visits homes every week to help ensure our students and families can engage and be successful in school.”

Aside from his liaison work, David also is the head JV football and JV girls basketball coach at MHS. In the summer, he works with rodeos and also leads a work crew of five Tribal students with Heart of Oregon Corps. He also has a wife, three children and a grandson at home.“

He has done a great job with keeping the Native kids in school and engaged in various activities,” said Erica Crossan, a district bus driver. “Growing up on the reservation, he knows what these kids deal with every day and what their future can look like without an education. He knows he is also helping his people have a better future.”

She said MHS’ kids and staff love him, and she should know. David is often on her bus when she drives to games and when he coordinates field trips to colleges.

“He works tirelessly. Well, sometimes, he sleeps on the bus,” Crossan said. “He loves teasing the kids and they love teasing him right back.”

But there’s a lot of work to be done in those four years.

“We lean on Butch every week to help our grade-level teams understand how to engage our kids in the learning and how to build those trusting relationships with the families,” Crook said.

But David doesn’t want to take all of the credit for the success of the Native students. He said the MHS team gets to know each student and takes an interest in each student.

“Butch is one of the educators that has found his ‘calling’ in life, and we so appreciate that he is part of our MHS family,” Crook said. “I can’t imagine Madras High School without Butch David.”