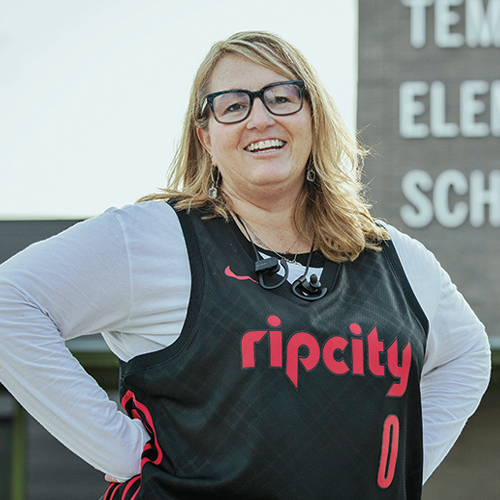 School: James Templeton Elementary School
Why she is Amazing: She treats students with empathy and compassion while still holding them to high academic standards.

COMPASSION IS KEY FOR TEMPLETON TEACHER

For DeeAnn Albaugh, compassion plays a big part in how she relates to her fourth-grade students at James Templeton Elementary School in Tigard.

That display included, until recently, paying personal visits to students’ homes during the course of the school year.
“I think once you are invited into a student’s home, you gain a greater respect for them as a student and for the family, (their) needs, and again, I’m better able to reach them where they’re at and make sure I get them to the next step,” Albaugh said.

In the past, Albaugh has taught kindergartners and third-graders, and formerly taught English language learning classes. She also helped create Kindergarten Connect, an orientation for young students getting ready for kindergarten. She is currently in her 11th year at Templeton Elementary.

“I love it,” she said of teaching at Templeton. “This community is amazing, absolutely amazing.”

While Albaugh admits that the COVID-19 pandemic has changed everything in the teaching world, she believes the real heroes are the students who are trying to make remote classrooms work.

Albaugh said the pandemic has forced everyone to navigate tough technological times and she tries to be honest with her students when she’s having a difficult time with the technology necessary to conduct classes online.

Her students respond in kind, realizing that “Mrs. Albaugh’s really struggling today because this isn’t working or that, and that builds compassion.” She said it also shows students the importance of perseverance as well as giving them a chance to console her by showing empathy.

“There’s a lot of silver linings that are coming out of this and I think you have to grab onto those because these have been very dark, hard times for a lot of people and you have to acknowledge that,” Albaugh said.

Along the way, Albaugh has learned that one way to relieve the stress of remote classroom teaching is simply getting up and going for a walk.

Over the years, Albaugh said she’s found that while it’s easy to get upset or sad when encountering a student experiencing homelessness, she has discovered the best thing she can do is show them all the resources that are available.

That might include having them do their reading requirements when they first come into her classroom in the morning after breakfast, saying it’s unreasonable to expect a student to do their homework if they’re living in a car. Compassion, she said, is a way to get the best out of students while at the same time holding them to a high level of expectations.

Albaugh said she tries to make learning exciting and fun because she believes it is. At times, she will even break out in a singsong voice, belting out something along the lines of, “Here we go. We’re ready to learn.”
Her humorous endgame, she admitted, is “the sooner we’re quiet, the sooner the singing will end.”

Something else that keeps things light in her classroom is the presence of Squirtle the Turtle, an aquatic turtle who lives in an aquarium next to the classroom’s American flag. “Every day, we say our pledge and he’s usually there looking at us,” she said, adding that she will often tell her students that Squirtle has borrowed her iPad and has made a video on Chatterpix, an app that allows users to make animals (or anything for that matter) appear to be talking.

A 1988 Tigard High School graduate, Albaugh was part of the Tiger team that won the Class AAA girls basketball championship, scoring 14 points in the title game to beat Oregon City. “We were really good that year,” she said. “It was fun.”

If she were to sum up her teaching philosophy, Albaugh said it would be to look at each child as a whole person and help them reach their academic potential, helping make them “feel completely taken care of and understood and loved and that you’re in their corner, advocating for them.”