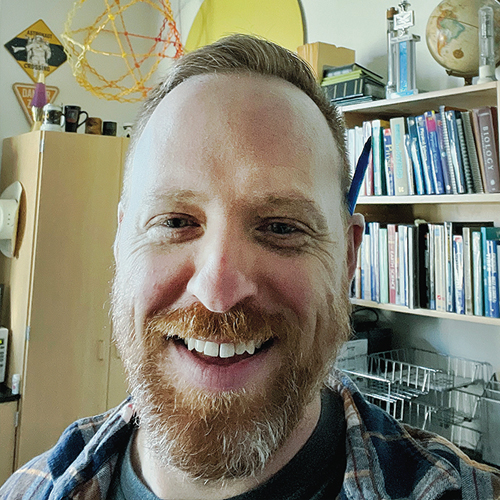 School: Reynolds High School
Why he is amazing: Moffat strives for success of all students and fellow teachers

Eric Moffat is a physics and science teacher at Reynolds High School, but that’s not all he teaches.

He realized about eight years ago, that with the rapidly increasing number of students who did not speak English as their first language, teachers were going to have to do a better job educating those students.

“It’s the job of all teachers to teach language to our students,” he said. “In the sciences, we are teaching language all the time.”

Of the 2,600 students at Reynolds High, more than half are not native English speakers and more than 42 languages are spoken at the school.

Seth Needler, Science Department chair at Reynolds High said, “Having worked with Eric for 12 years, he is an amazing teacher and colleague. He always thinks of the big picture and how his teaching impacts students’ lives beyond just the school walls.”

Moffat, 41, not only teaches students, he teaches teachers, spending half his time as an instructional coach.

A profile of Moffat by Reynolds High School administration said “Eric is no stranger to serving teachers. He goes above and beyond as a leader on our Interactive Strategies Team. He has extended himself throughout the school year to support new employees. Eric has continued to support staff as we transition to Distance Learning via instructional videos, emails and meetings.”

According to his school profile, Moffat has also served a part of the Link Crew Freshmen Orientation for many years and has as Reynolds’ National Honor Society advisor.

Moffat was included in a group of teachers who traveled to Chicago to attend The University of Chicago’s National Freshman Success Institute. The Chicago sessions focus on how to successfully transition students from middle to high school and learn what matters most for high school success, among many topics.

Beyond all that, teaching is rewarding for Moffat.
“I just like helping people,” he said.

He admits that he had to get past some self-consciousness at the beginning of his career.

“The big thing I had to get over was that I don’t like talking in front of people.”

Moffat grew up in Portland, but his family eventually moved to Gresham and he graduated from Barlow High School.

A twin, Moffat attended Whitworth University in Spokane, Washington, on a music scholarship for the trombone.

But music did not turn out to be Moffat’s path — he fell in love with physics during college. He also fell in love with another student at Whitworth. They married and now have three kids, including twins of their own, who will eventually graduate from Barlow High School.

Moffat describes himself as a good student in college — good enough to tutor other students in physics — but not a superstar.

“That’s when I figured out I enjoyed teaching,” he said.

He went on the get his Master’s degree from Eastern Washington University and spent his first three years teaching math in a Spokane high school.

Wanting to be closer to family, the couple moved to Oregon and Moffat took a job teaching science at Reynolds High School, which he’s done for 16 years.

When he’s not teaching, Moffat likes to play the piano and is involved with his church. The family hikes and spends time outdoors, and like any proud father, he attends his kids’ sporting events.

Being a parent of teenagers, he’s getting a new perspective on teaching high school.

“I’m seeing the parent lens in a more interesting way. I’m always looking to see how I can support parents in supporting their teenagers,” he said.

Calling Moffat “an exceptionally kind and generous person,” Needler said “Students say that he cares about them and helps them. He loves connecting with people and makes everybody feel comfortable.”