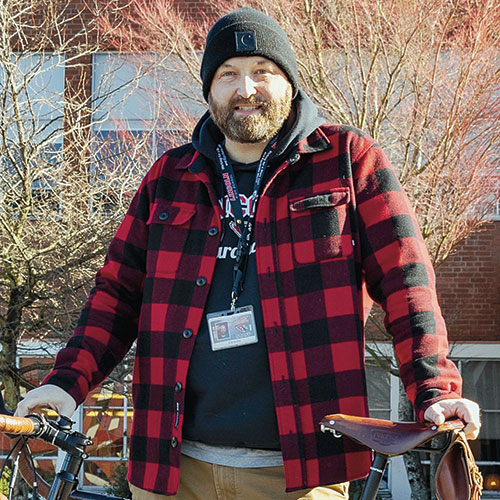 Hometown: Portland
Why he is an Amazing Educator:
Bliss's passion for knowledge and dedication to students inspires them to think critically and make the world a better place.

Kim Bliss is a Portlander, through and through. He grew up in the Rose City, graduated Cleveland High School, then went on to the University of Oregon.

It only made sense that after a stint teaching in Brooklyn, New York for the New York City Teaching Fellows program, he found himself back in the Pacific Northwest. He taught for nine years in Hillsboro, before he took a job teaching for the same school district he grew up in.

“Annually, I’d just reach out to PPS principals,” Bliss said of his casual efforts to find a gig closer to home in Southeast Portland. “I just was lucky enough to be hired here. It was hard for me to leave Hillsboro, because I felt such a connection in that community.”

Bliss eventually got hired at Lincoln High School in Portland in 2018. This year marks his fourth year at the downtown campus. Bliss is the International Baccalaureate Program coordinator and a theory of knowledge teacher at Lincoln. He’s spent the last 17 years in public education.

“I just really live and breathe public education. I believe in it wholeheartedly,” Bliss said. He calls himself a lifelong learner and says teaching is a “community profession.”

His Portland upbringing means he now bikes to and from work each day, stopping to take in the picturesque city skyline from the Hawthorne Bridge as he crosses the river.

Rain has never stopped him from cycling and no, he doesn’t own an umbrella.

He admits he almost didn’t become a teacher, setting his sights briefly on a law degree. It didn’t take long for him to pursue his passion for education.

His students are glad he did.

“I’ve never met a teacher who engaged so much with their students and put so much effort into giving their students the resources they need,” said Kareena Morrissey, a student at Lincoln High.

“Not only is he a great teacher in class, but he’s also a great IB coordinator because he’s always working really hard to make sure his students don’t have to worry about anything.”

Bliss’s position is part of a rigorous academic program called International Baccalaureate, or IB. The courses are similar to Advanced Placement courses, but aim for a more robust grasp and application of concepts. Students can take IB courses, or they can earn an IB diploma, which is internationally recognized.

“It’s a mission driven education,” Bliss said. “At Lincoln we really care what kids know. We want you to be proficient in the academic (subjects) you’re studying, but we’re also concerned with who you become.”

The theory of knowledge course that Bliss teaches is a lesson in epistemology — the examination of what we know. It’s a philosophical approach to examining knowledge through different lenses.

“It allows them to put all their academic knowledge under a microscope,” Bliss said. “What does the anatomy of justification look like in your different content areas? What are the limits of what we can know in these spaces?”

Teaching and mentoring students on IB courses is a challenge in itself, but the background of a pandemic has made it more challenging. Teachers have been forced to reckon with their own mental health, while showing up for dozens of students. Bliss said it’s made the social-emotional component of education a bigger priority for him.

At a time when teachers are contemplating leaving the profession at an unprecedented rate, his students remind him why he’s grateful for his job.

“What motivates me is to work with kids. They’re so resilient and compassionate and caring,” Bliss said. “They have this power all the time, which I don’t take for granted, which is they see the world for the way that it is and say, ‘it doesn’t have to be like this.’”

Peyton Chapman is the longtime principal at Lincoln High School. She called Bliss “an outstanding educator whose heart is as big as his brilliant mind.”

“It has been an honor and a privilege to work with Mr. Bliss as Lincoln’s IB Coordinator. He has increased access for all students, and he believes in giving students a voice in their education,” Chapman said.

“He uses the IB Framework of inquiry and authentic assessments to best support students to create learning portfolios that demonstrate their thinking and growth over time.”