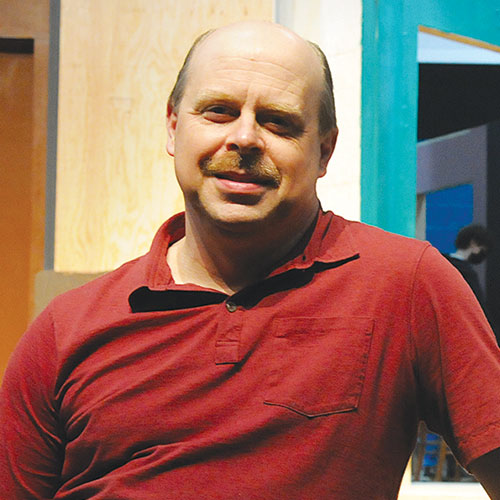 Hometown: Newberg
Why he is an Amazing Educator:
Because he fosters a nurturing environment where budding thespians and production crew members can grow.

In the almost 30 years Mike McConaughey has been an educator, his ultimate teaching philosophy has never changed: “treat people well.”

The Newberg High School theater director has built a reputation in the community as doing just that — and more. While also lauded for his passion, good listening skills and great sense of humor, “Mr. Mac” is perhaps best known and most beloved for fostering a nurturing environment in which students can grow.

“He makes space for every single student to feel welcome and at home and valued in the theater world,” Kendelyn Thomas, a former NHS student of his, said. “He welcomes everybody and everyone and listens to what they need to feel safe in the program.”

Like many former students, Thomas continues to stay in contact with McConaughey even after graduating, keeping him updated on her life and seeking advice when needed.

“I have never doubted — then or now — that he’s in my corner,” Thomas said.

Tim Fodge, who graduated from C.S Lewis Academy and participated in its theater program before McConaughey migrated to NHS, said that McConaughey taught him how to mentally detach from a role after a performance. At the time, Fodge said he was going through depression and having to play a dark character was only making it worse. Not only did

McConaughey’s tips for ‘taking off’ the character help Fodge with his mental health, but it also radically changed how he approached theater.

To McConaughey, that sense of support and belonging is the very essence of theater.

“People need a place to belong,” he said. “Maybe they aren’t ready to be a star, but they have access to a family. This is an incredibly welcoming, safe space for kids to find out who they are.”

McConaughey’s own love for theater developed in sixth grade and flourished throughout middle school and high school.

Raised in Spokane, he graduated George Fox University in 1993 with a degree in secondary language arts education, having participated extensively in the theater program. He later received two master’s degrees, one from GFU related to administration in 2009 and the other from Southern Oregon University in 2018 for theater production and design.

McConaughey worked at CSLA for 21 years, first as a language arts teacher and then as an administrator. While there, he built the academy’s theater program from the ground up. Seven years ago, McConaughey transitioned to NHS, where he teaches language arts and career and technical education classes in addition to theater.

McConaughey attributes his success as an educator to always providing students with the chance to step out of their comfort zones, while also putting them in a position to be successful.

“When they are successful, they want to do it again — and they bring friends,” he said.

He said he is also always looking for ways to show students “they are loved and valued,” noting that when they feel “valued and important, it becomes their program.”

As for why he thought he was chosen as an Amazing Educator, McConaughey said, “I can hope that somebody saw that I’m taking care of their kids” and “I can hope someone could see a change in their kids as they’ve grown up in the program.”

He clarified that he while he doesn’t do what he does to win awards, “it is nice to have some recognition that I’m doing something right,” especially during such a difficult time for teachers nationwide.