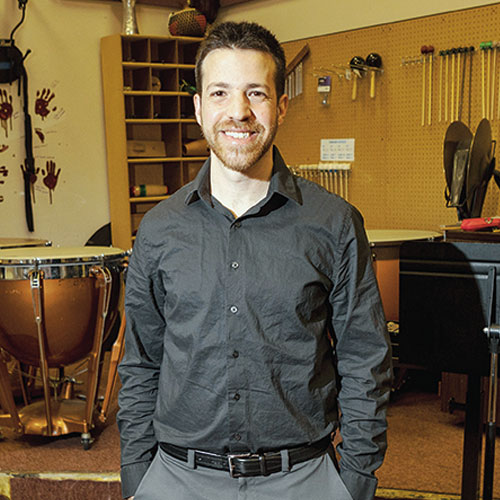 Hometown: Forest Grove
Why he is an Amazing Educator:
The enthusiastic band leader at Forest Grove High School has grown the music program to include electives in drums, jazz and guitar..

Stewart Schlazer covered Nirvana on the piano at his fifth-grade talent show before picking up the guitar, mellophone, bass and everything else.

“My philosophy is when you’re young, you’re like, ‘I’m going to make the best musicians and have the best band.’ I don’t care about that. I just want good people,” Schlazer said. “I try to use the music to make better people, instead of using the people to make better music.”

It’s a philosophy that serves the enthusiastic band director well in his job in the Forest Grove School District.
Schlazer, whose mom was a math teacher, graduated from Florida State University with degrees in music composition and education, which requires learning a little bit of everything string, wind and brass. His first job out of college was with Salem-Keizer Public Schools, but budget cuts cost him the gig, so he returned to teach in Florida for five years.
In 2014, he started in the Forest Grove School District, overseeing the elementary, middle and high school band programs.

At Forest Grove High School, where graduation requirements include one art credit from choir, band, orchestra or a range of fine arts, Schlazer has grown the band program from one elective into two levels of band electives, as well as more specific classes in jazz, guitar and percussion.

“A lot of kids in band really want to be there and commit to it for many years. Some of these kids, I’ve had them since fifth or sixth grade, and I’ve known them half their life,” Schlazer said. “Other kids walk into the guitar class, and they know it’s a semester long and they can treat it like it’s just another class. But you can play guitar for the rest of your life, and you’ll probably want to.”

Schlazer mandates participation in state solo and ensemble competitions for high school students, where students step out of the band to choose a piece of their own liking.

“One thing I really like is how he made the requirement to join the solo and ensemble competition. A lot of people are hesitant to do that. You’ve got to learn how to prepare solo music in front of a judge and your peers instead of in a large band setting.

I think that helped us all grow,” said Elena Perez, a flutist and junior at the University of Oregon studying music. “My senior year was the most fun I ever had in band. That experience made me love music more than I ever have and apply to music school. Now I’m continuing to make music and know the impact it can have.”

During the pandemic, band participation dropped, which led to fewer students continuing this school year. Schlazer kept the program going with video lessons.

“When COVID hit in 2020, in sixth grade, Mr. Schalzer kept him playing at home. I know he lost some students’ interest, but mine still loved it,” said Annie Peaper, whose son Caden is now a student at Neil Armstrong Middle School.

“He’s got a great, upbeat and happy attitude that really draws the kids in through music and how important it can be in their lives. He’s just a good community member.”

Schlazer said while the numbers are down a little, spirit is strong.

“I tell my students, ‘Hey, it’s an elective, you’re going to be awesome if you want to be here. If you don’t want to be here, that’s totally fine. I just hope you love what you choose to do with your time as much as I do. If you stick here, I’ll give you everything I got,’” Schlazer said.